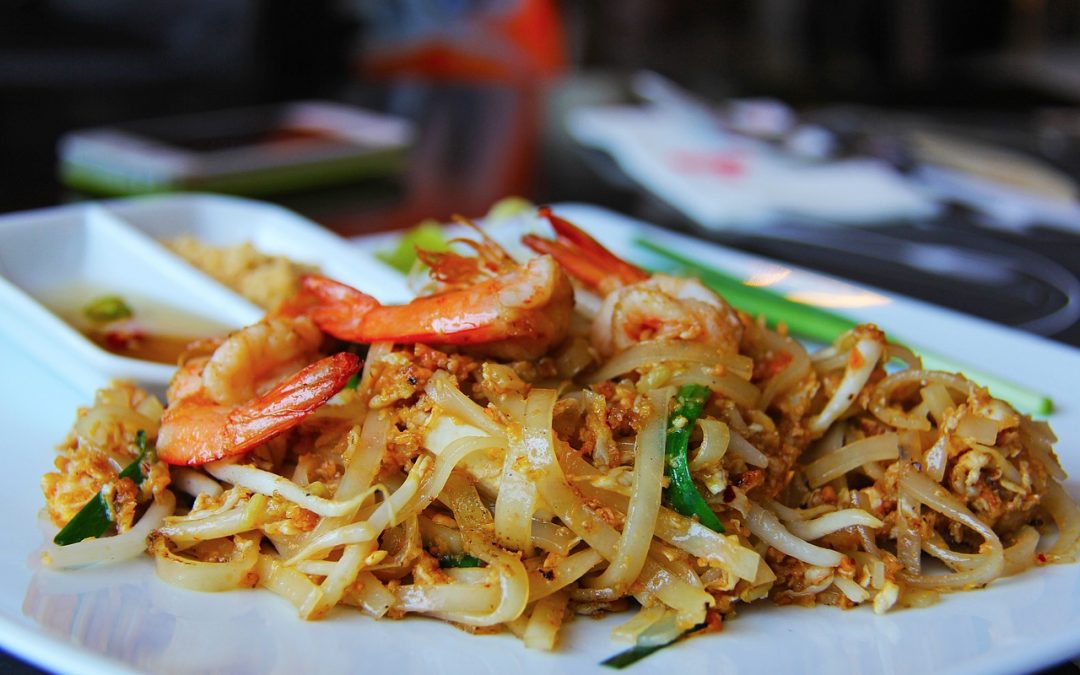 Even though it is probably one of the most popular Thai dishes, to most diners this entrée remains a tasty, albeit mysterious, blend of noodles, vegetables, and proteins. This week’s installment of Gastronome Wednesday ~ Pad Thai is quite simple to make if one happens to be in the country or has access to an international food store that can supply the appropriate ingredients.

Most devotees would be surprised to learn that the recipe itself is only about a century old although the basic cooking concepts used in the recipe are much older. 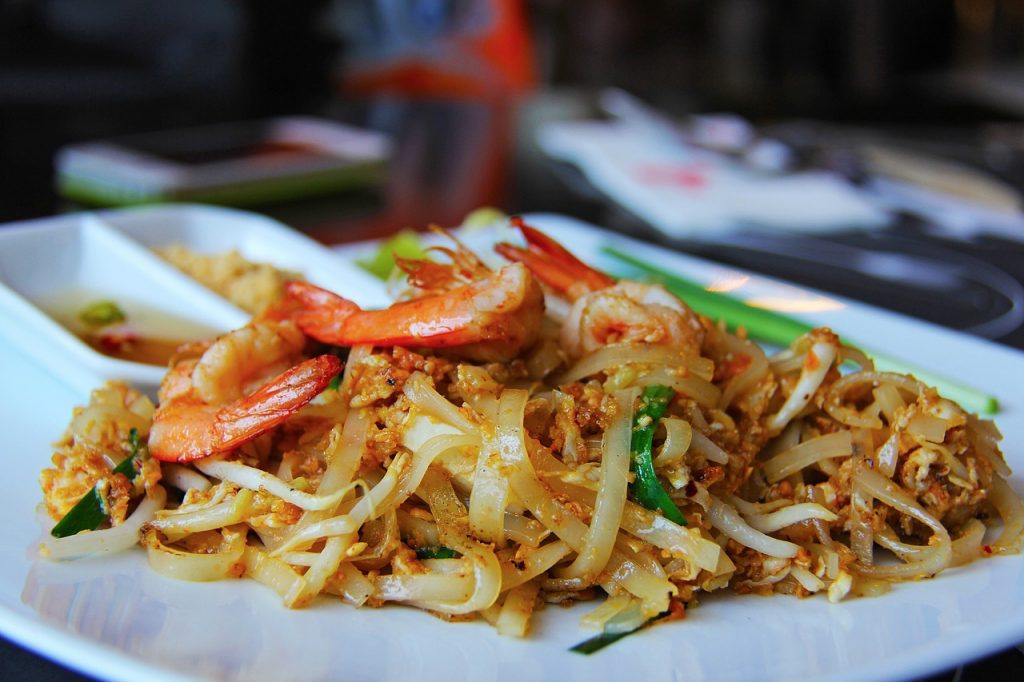 Stir-fried noodles, the precursor to this dish, first made their appearance in Thailand during the time of the Ayutthaya Kingdom, a dynasty that lasted from the mid-1300s to the late 1700s. The aforementioned entrée could have been brought to Thailand by Vietnamese traders but it is far more likely to have Chinese origins due to its name and cooking style. However, this humble recipe was eventually given a major makeover by a military leader who had recently come to power and was determined to ‘civilize’ his country to Western standards.

Plaek Phibunsongkhram, the effective ruler of Thailand both before and after World War Two, was trying to promote local patriotism by getting rid of China’s influence in his country. The Thai government subsequently began to promote noodles rather than rice dishes, although they were a major exporter of rice themselves. 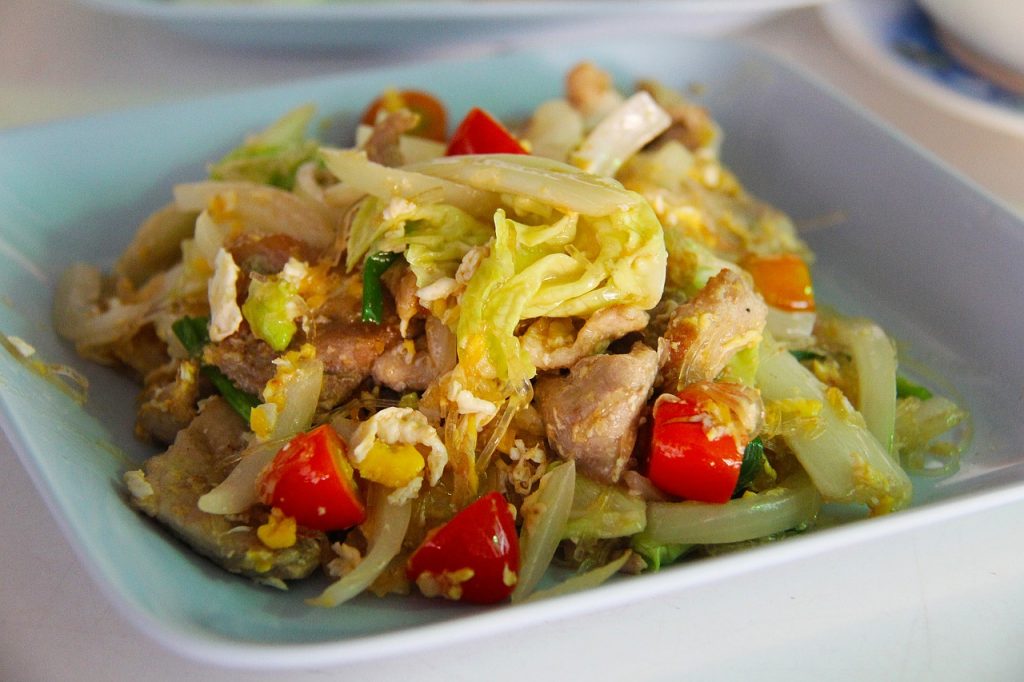 This could be the main reason that Pad Thai is made of noodles rather than rice. Pork is also not traditionally added to pad Thai, because the same government also believed that that particular meat was symbolic of Chinese influence and should therefore be avoided. The official recipe produced by the reigning dictator naturally left it out. People today add pork if they really want it as well.

In any case, Plaek Phibunsongkhram had his associates come up with the official recipe for pad Thai in hopes of improving the nutrient content of his country’s meals. He was also trying to keep the people of his country from being dependent on the ubiquitous Chinese fast-food vendors. At that time the usual diet of most Thai families consisted primarily of salty, spicy rice dishes with a few green leaves thrown in for good measure if they weren’t visiting their local Chinese food dealer.

Although Plaek’s son claims that the Phibunsongkhram clan used to make a similar dish before they went public with their recipe, the result publication formed the basis for what is now internationally recognized as Pad Thai. The basic recipe typically contains eggs, rice noodles, tamarind, peanuts, fish sauce, lime juice, garlic, hot peppers, and palm sugar. 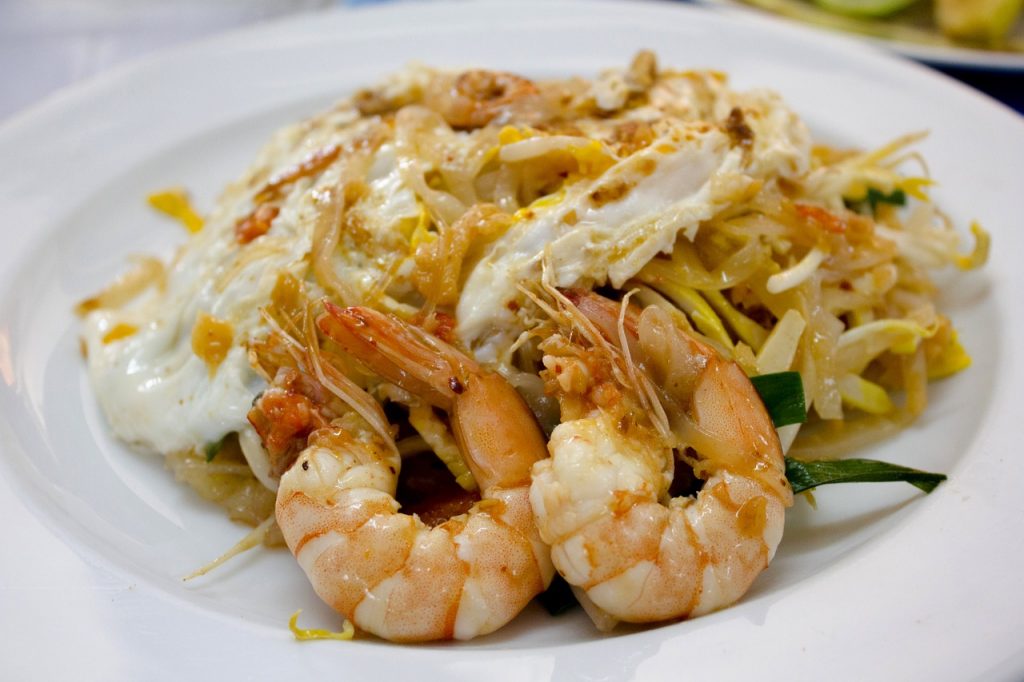 Other available add-in include a wide variety of meat and vegetables such as shrimp, tofu, bean sprouts, radishes, and/or cilantro. Locally produced fruits are often added as well. However, the mark of a good cook is their effectiveness in balancing out the many different flavors present in pad Thai.

The dish was actively promoted by the government but it had a lot of other things going for it that endeared it to the local populace. Pad Thai was not only rich in nutrients, it was affordable to make and it used easily obtainable ingredients. These factors were certainly enough to sell it to families in a struggling, post-war economy. A period of heavy rains had also caused flooding in various parts of the country, resulting in outbreaks of various diseases. However, eating cooked food such as pad Thai helped locals successfully avoid these ailments.

Perhaps the real irony is that, while Plaek Phibunsongkhram succeeded in improving local diets, he did so using cooking methods from China. The entrée’s name is even a shortened form of kway teow pad Thai, a term indicating that these stir-fried Chinese noodles have been made in the Thai style. Even so, the ingredients and flavors in the dish represent the country so well that the Thai people have readily adopted the food as their own, much to the satisfaction of hungry customers around the world.

That’s it for this week’s installment of Gastronome Wednesday ~ Pad Thai. Have you tried it? Do you like it? What’s your favorite version? Share your experiences with us!