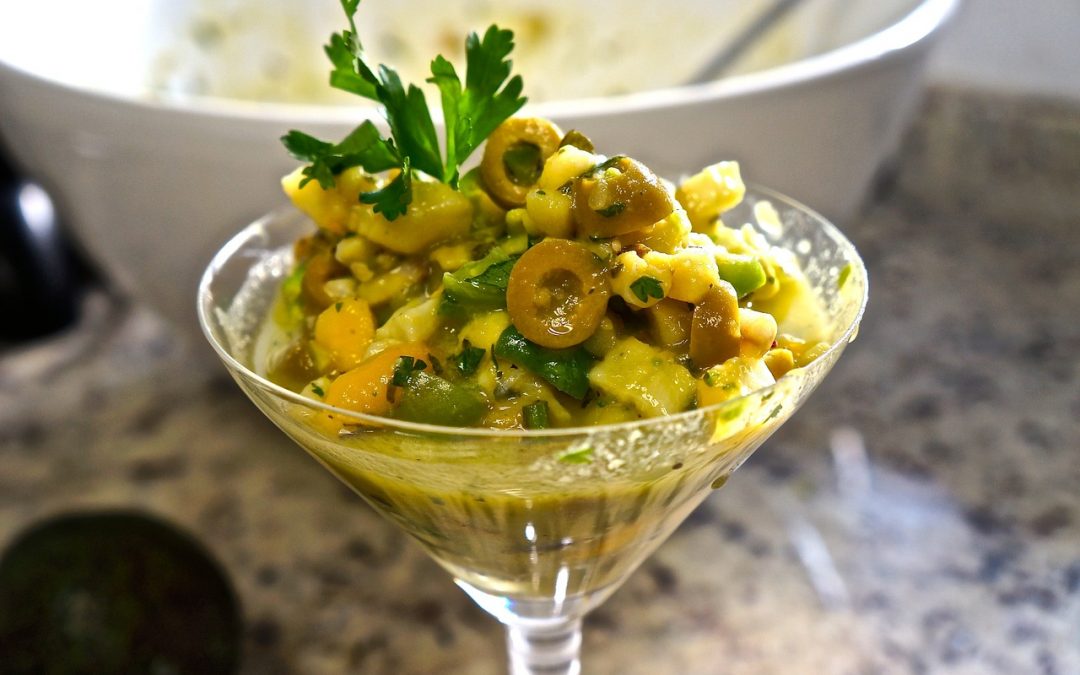 If the thought of eating raw seafood marinated in citrus juice and various spices doesn’t sound off-putting, this dish might just be the one to try. While the original recipe is thought to have originated in northern Peru or possibly Ecuador, there are many different variations that can be now found in different parts of South America since each region has naturally put their own spin on things. This week’s installment of Gastronome Wednesday ~  Ceviche will discuss this awesome raw fish dish. 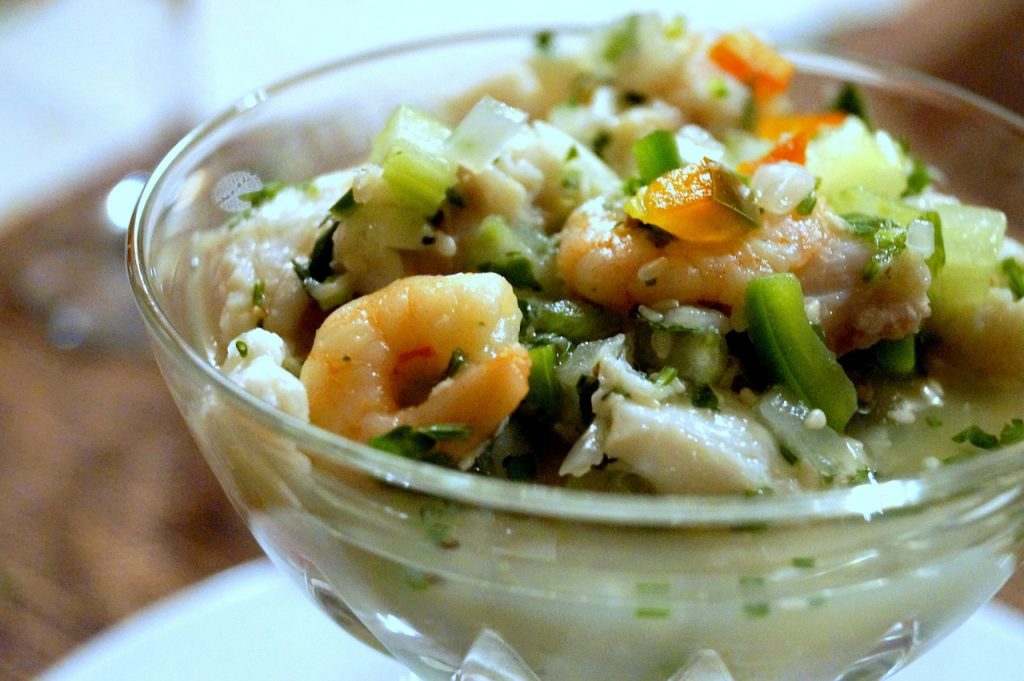 It seems that the countries cannot agree on what the dish is called since ceviche also goes by the names of seviche and cebiche. However, all three monikers have been officially recognized by the Royal Spanish Academy as being acceptable terms in the Spanish language.

As is the case with most dishes, the origins of ceviche are shrouded in mystery. One theory is that the precursor to modern ceviche was developed by the Moche Indians who lived along the Peruvian coast. These people preserved their catches with fermented banana passion fruit juice, salt, seaweed, and a native hot pepper called the aji. This practice was continued by their descendants.

It has also been said that this practice allowed Incan Emperor who lived high in the Andes to more easily enjoy the taste of fresh seafood, despite the fact that he lived so far away from the coast. In Quechan, the region’s native tongue, ‘siwichi’ means fresh fish, after all. However, during that particular time period, a type of homemade beer called chicha was regarded as the marinade of choice rather than the fruit juices that are commonly seen today. 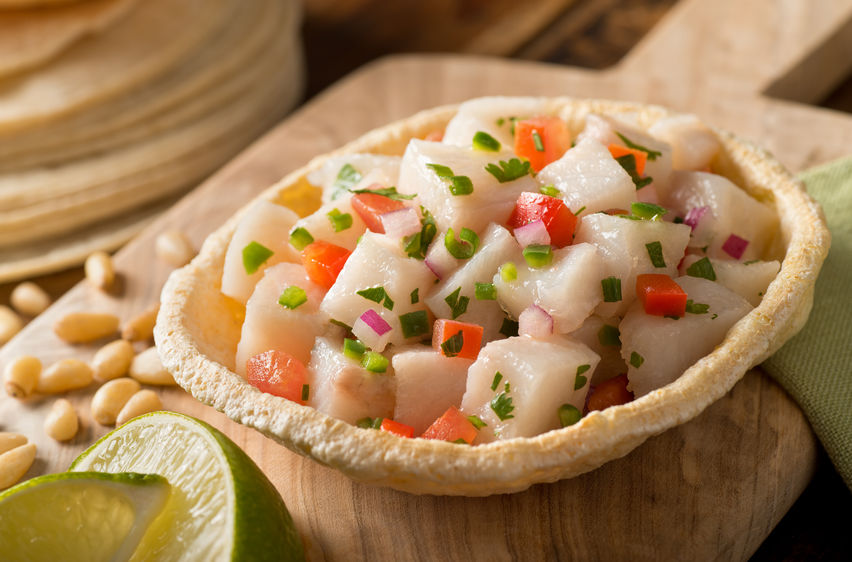 The dish’s eventual name might even reflect on the fact that in Moorish Spain, meat was sometimes cooked with vinegar. Captives that were sent with the conquistadors to the New World presumably brought their culinary habits with them and adapted their original recipes to use whatever produce was at hand once they arrived. This fusion helped develop the basis for modern day ceviche, causing orange and lime juice to make their way into the recipe.

Perhaps the most amusing theory as to how the dish acquired its name is the thought that British sailors could not either stomach the spicy concoction. It reportedly made them scream: ‘son of a bitch’ upon tasting it, a phrase that the locals tried to translate, with ‘ceviche’ being the result. The Spanish word for pickled goods ‘escabeche’ may have also had some influence on the term that was used to eventually identify the entrée.

Ceviche normally contains seafood such as shrimp or fish, lime juice, minced onions, salt, ground peppercorns, and hot peppers of some kind. In some recipes, orange or lemon juice will even be used in place of lime or alongside it. Depending on the regional preferences, additional ceviche ingredients may include garlic, corn, olives, tomatoes, sweet potato slices, celery, allspice, cilantro, avocados, yerba buena, Worcestershire sauce and/or seaweed. Gastronome Wednesday ~ Ceviche, the mixture would originally be marinated for several hours, but now only a short period of time is considered necessary for the flavors to meld together. 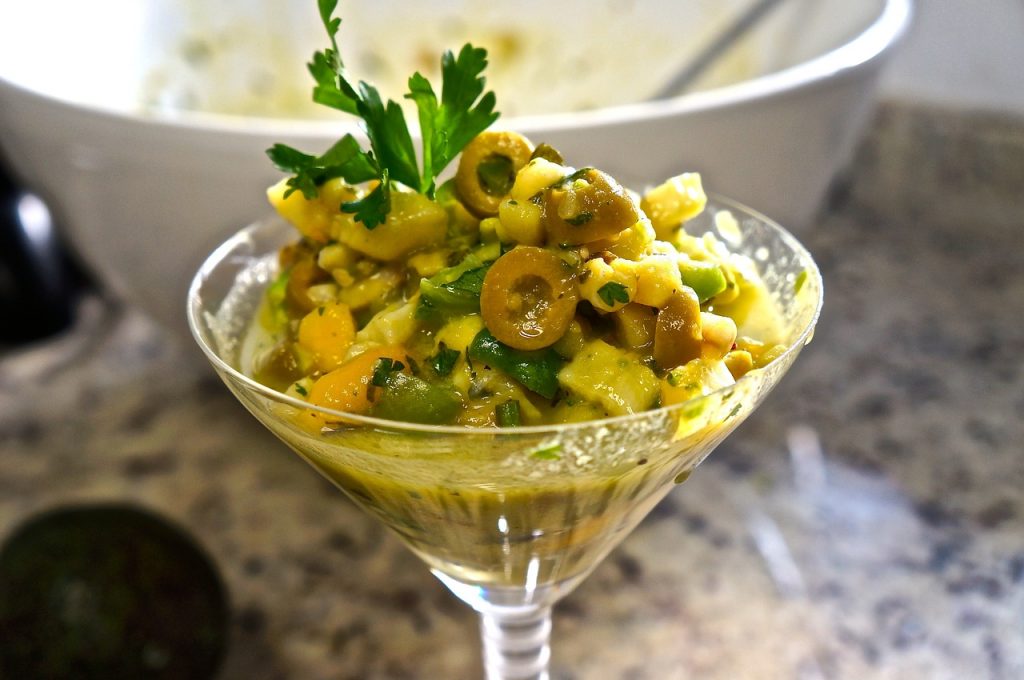 It is a common misconception that the citrus juices in the recipe cook the raw seafood and render it completely safe to eat. This is not the case because the high acid levels involved merely change the texture of the meat in question, rather than safely riding the ceviche of harmful elements. Due to the obvious health risk associated with eating uncooked seafood, it is very important to make sure the aforementioned ingredient is as fresh as possible and that it comes from uncontaminated ocean waters.

Of course, pregnant women are advised naturally against eating ceviche because of the risk it might also pose to their unborn child. However, adventurous folks that don’t mind a bit of risk with their dinner should note that many, but not all, of the ailments that can arise from eating this entrée are considered treatable despite their unpleasant side effects. Either way, the choice is yours.

So that’s Gastronome Wednesday ~ Ceviche…have you enjoyed this dish? Do you have a favorite recipe of your own? Share your experiences with us!