Ackee and salt fish is a traditional Jamaican entrée. However, the ackee tree is not native to the island. It was imported from West Africa along with the slaves who were used for labor on the plantations that were seen on the island as early as the 1600s. Enjoy this week’s installment of Gastronome Wednesday ~ Ackee and Salt Fish. 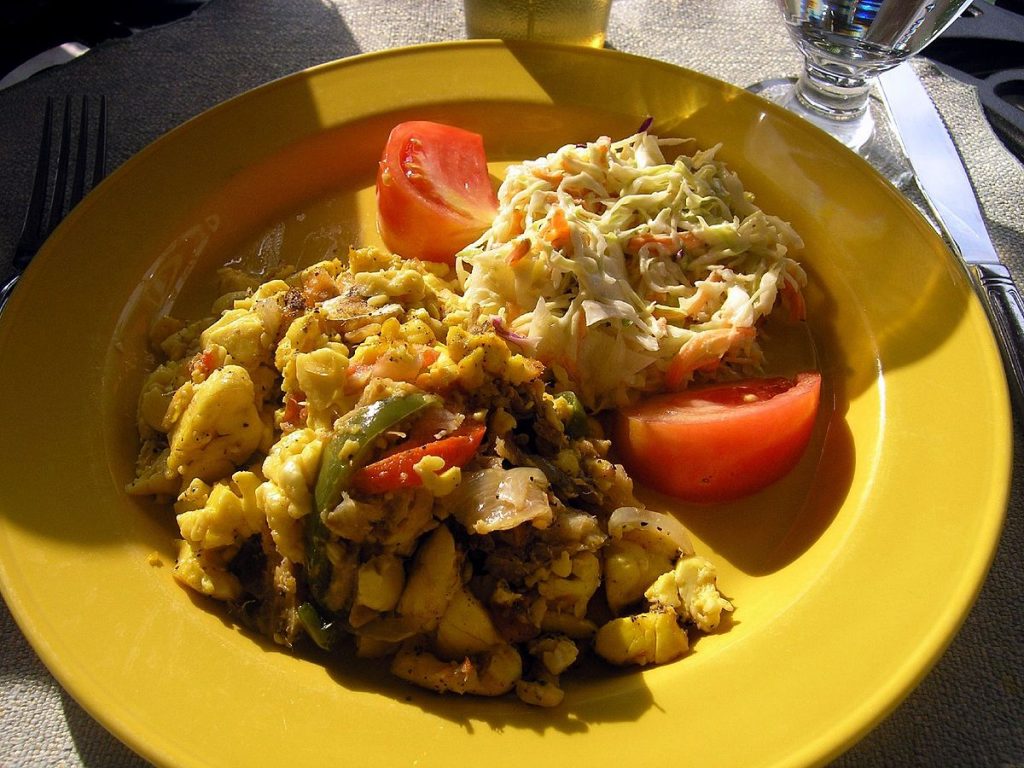 During the centuries that followed, salted fish was used as cheap source of protein for these workers and the ackee fruit was something they had brought with them from home. Both items subsequently became a mainstay of the slaves’ diets.

The combination became a popular meal and has regularly been served up for breakfast ever since. Yet there is currently some dispute among scholars as to whether or not the entrée should actually be viewed as the national dish of Jamaica.

The ingredients didn’t originate on the island and salt fish has become far more expensive than it used to be. But the fact remains that the dish is a Jamaican staple that travelers expect to see on menus, even now.

As the name would imply, this entrée is made from salted fish, usually cod, which has been soaked overnight to make it more palatable.

All the cook needs to do then is remove both the skin and bones from the fish before throwing it in the pot with everything else. The stew is then allowed to simmer for a long period of time, making it easy for a busy chef to put together in a hurry before going off to do something else.

Common side items include boiled green bananas, fried plantains, avocados, breadfruit, dumplings, or hard dough bread which is sweeter than a normal loaf. Rice and peas can be served on the side as well or they may be blended with everything else for a complete one-pot meal.

As is the case with most fresh fruit, ackee is not allowed to be imported to the United States. The fruit is even deemed poisonous because it contains a harmful chemical called hypoglycine A at various times during its growth. Only the yellow arils of the plant are actually eaten. So definitely don’t bring any ackee home with you if you happen to be visiting Jamaica any time soon.

I hope you enjoyed this week’s installment of Gastronome Wednesday ~ Ackee and Salt Fish. Have you ever tried this dish or one like it? Share your experiences with us!